We will train each person to the best of our ability. We have successfully trained several students with considerable postural challenges and pain issues. Training improves an individuals ability to cope with whatever problems they have as well as giving them the skills to teach and help others. It is a very fulfilling experince.

Tutors: All our teachers are working professionals who contribute to the rich variety of skills that make the course a lively and enthusiastic learning environment. They include:

The course is of three years minimum duration in accordance with the rules of the Society of Teachers of the Alexander Technique (STAT) who have approved the course. Successful graduates are STAT certified, will be issued a certificate of training from the Brighton Alexander Technique College

The Brighton Alexander Technique College is a Carrington style-training course, evolving our practice from the renowned skills of Walter & Dilys Carrington.

Carolyn Nicholls, Head of Training, was privileged to have been trained by Walter and Dilys Carrington at the Constructive Teaching Centre in London, qualifying in 1982. She holds an MA (distinction) in Alexander Technique teacher Training.

Walter ran Alexander’s own training course and took over at Alexander’s death in 1955. He ran a remarkable course, together with Dilys and other teachers up to his own death in 2005. Dilys was a very creative teacher who influenced the development of what is known as ‘hand-on’ skills, the subtle, elastic quality that defines a good Alexander teachers hands. 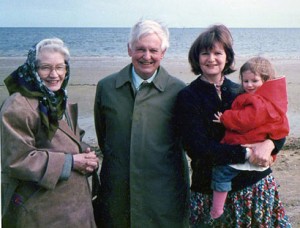 Dilys and Walter Carrington with Carolyn and daughter  on a beach in St Kilda, Melbourne Australia in 1987

Carolyn documented this approach of Dily’s in 1986, and in 1987, Walter and Dilys visited Australia, where she was the assistant director of The Melbourne Alexander Teacher Training School, to see how her ideas were being put into practice. Carolyn reviewed the document when she undertook a master’s degree in Alexander Technique Teacher Training.

We offer a variety of ways you can get involved with the training course for your own benefit, you can spend a morning a week for half a term or a term, to get regular in-depth Alexander experience, you can study with us for one week, a half term (5 weeks) or even a year. You will be included in the full college timetable, receive regular work from all the training course teachers, join in with activities, lectures and discussion. You can explore voice work, performance skills, application for musicians, or simply enjoy the work for your own self development and well-being. The Alexander Technique can be practiced anywhere when you have the skills!

Since 1990, we have trained people from all over the world, graduating over 100 teachers who now teach in many overseas countries as well as Brighton and all over the UK. Becoming an Alexander Teacher is an exciting journey of gaining professional skills, personal growth and development. One of our graduates has returned to India as the first resident AT teacher in the country. 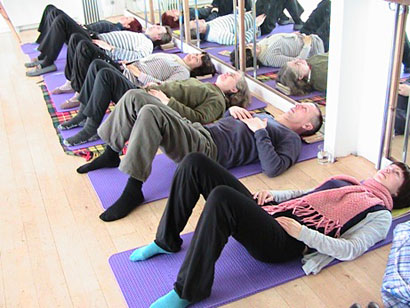 Our training day starts with semi-supine, a practical procedure that encourages deep release of long held tension patterns and reorganization of postural support. It is an active process although from the outside it looks simple, it is an exploration of Use and Functioning; and it's a wonderful way to start the learning day.

Full time training requires you to complete eighteen 5 week blocks of training consecutively over the three years. This is the normal pattern of training.

The core curriculum is informed by Carolyn’s Masters research study in the Specialised Use of The Hands in Alexander Technique. It consists of continuous training and practice in improving the trainees own use so that they have a reliably good standard of use and can be expected to go on improving after they have left the training course. This involves a developing understanding of the basic concepts of the Technique, both kinaesthetically and intellectually, these include:

Training in the established procedures of teaching the Technique. These include Chair work, table work, saddle work, walking, breath and voice work, application to activities and how to use your hands as a teacher. This is taught under close supervision from experienced teachers, as it is the heart of the whole training. Throughout the course classes and exercises are given to develop verbal and written fluency in presenting the Alexander Technique. Students are expected to work on themselves both during course hours and outside of course hours, and they have access to a substantial library of relevant books and articles.

Special days We like to explore different ways of applying the Alexander Technique to a variety of skills and activities. One example was applying the skills to mark making and painting.   This day culminated in the production of a painting that was chosen as the front cover of the Alexander Journal 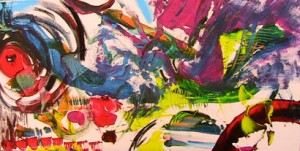 Personal experience of the Alexander Technique, usually at least thirty lessons. If however this is not possible, for geographical or other reasons, and you wish to be considered for training, please contact us. Some work experience that suggests ability to communicate with people. There is an interview process with head of training Carolyn Nicholls that consists of prospective candidates visiting the course, and having a private lesson with Carolyn. There is a normal lesson fee payable and a nominal charge of £50 for visiting the course for a morning. You will be included in all activities.

In the case of students applying from overseas, where a visit is impractical, we may ask for a reference from your teacher. In the unusual circumstances where a teacher is not available in your country, please contact us, as it may be possible to offer you a place on a probationary basis. Please note we can not offer Tier 4 vistas to overseas students.

In the first instance, you should contact the director of training, Carolyn Nicholls, either by telephone 01273 278523, or email, carolyn.nicholls@me.com

The course is taught entirely in English. For their own benefit, students from non- English speaking countries should ensure they have acquired sufficient knowledge of English when they begin training to follow instructions from teachers.

Come and see us

You are most welcome to spend a morning with us if you are interested in training. You will be included in all the college activities for that morning, receive two 'turns' from teachers and hear the lectures. We will explain how the course is tailored with each student. There is a charge of £65. email: carolyn.nicholls@me.com or call Carolyn Nicholls on 01273 278523

The training course runs Cornerstone Community Centre. Church Road. Hove BN3 2FL Our studio is a delightful, well-appointed room, airy, with stunning stained glass windows. There are several small shops and cafes nearby and Hove's George Street with all its shops is a five-minute walk away. Hove station is approximately 10 minutes walk. Hove is approximately one hour by train from London. Buses run from Hove station to Brighton Town Centre. Contact us to arrange an appointment or if you’d like to ask for more information.

Read what one of our graduates says:

“When I joined the training course I had read a bit about the Technique, but, coming from India, I had had no lessons at all, and of course, didn’t have any idea of what a training course should contain. Fortunately, the course covered all the things I thought I would like to learn and lots more that I hadn’t thought of! I liked the blend of rigour and freedom – we had a daily schedule that we followed so there was a structure to the approach, but we also had time to work with each other, read and browse in the library. The schedule was never a constraint, if something unexpected and interesting came up we could always go off at a tangent to explore it and come back to the routine later. We had a lot of visitors, either teachers from other schools, or people who wanted to have an experience of the course. Interacting with them was very fruitful because we got different perspectives to the work that we did. All the teachers on the course are very encouraging and patient, and that really helped, especially in the beginning, when I couldn’t quite make out what was going on. The training course has been running for years and Carolyn combines the richness of her experience with fresh and innovative ways of teaching. It was very exciting to be taught by a teacher who was intensely involved with the Technique and was constantly discovering new aspects of it herself. After I graduated, while I was nervous about teaching ‘real’ people, I never really had doubts about my ability to do it. We had a systematic and thorough preparation for teaching, starting from drawing up lesson plans to learning how to communicate the principles of the Technique clearly to our pupils, and deal with their doubts. We also had regular practical sessions when we learnt to work on pupils and talk to them without losing all sense of our own use. Padmini Menon .